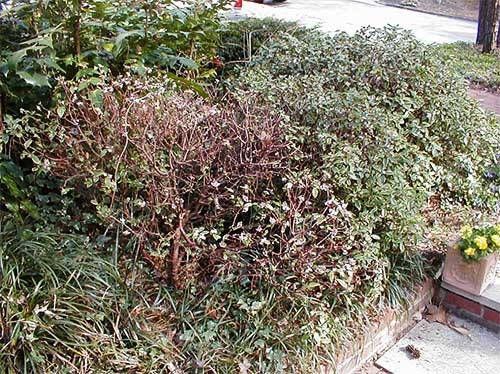 Both the Pine and Oregon vole are almost entirely subterranean. They have a network of underground tunnels where they forage for food thus making them hard to detect. They damage trees, shrubs, bulbs, and perennials from below the ground, consuming small roots, girdling large roots, and eating the bark from the base of small trees. Plants severed from the roots make it possible to easily pull the top of the plant out of the soil. By the time you notice weak, unhealthy plants, the damage is already extensive. Plants not killed outright may be invaded by diseases or die from water stress during periods of drought. 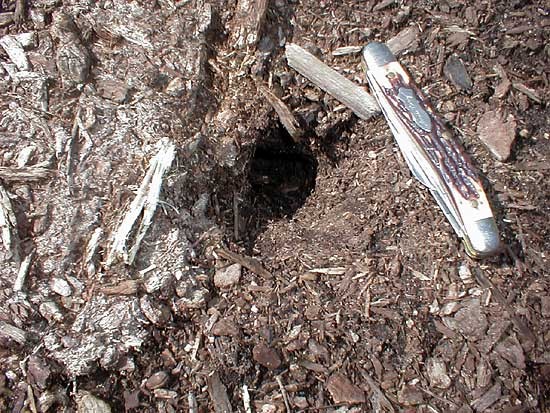 If you detect tunneling, then set up a test in the area with the Apple Sign Test to confirm activity.

Look for signs of stress in your ornamental plantings. Search and feel for underground tunnels around the base of the stressed shrubs that may reveal vole activity. You may even probe your finger into the ground to locate the underground tunnels.

Many times moles are blamed for this damage because voles can use mole tunnels to reach plant roots and bulbs. (Moles feed on earthworms and the grubs in the lawn, not roots. Their tunneling activity raises the soil into ridges). 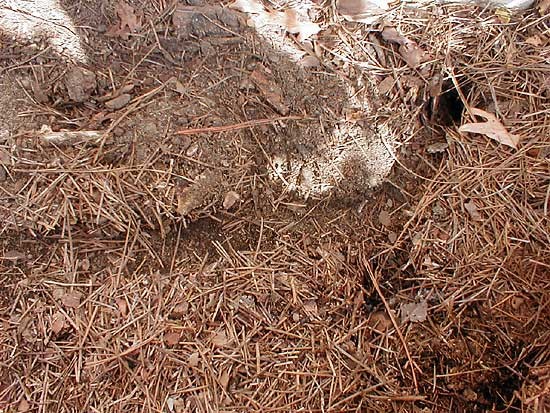 Look for their presence by locating their circular burrow entrances not more than 1" - 1 ½" in size such as this one located in a landscaped garden mulched with hardwood mulch.

You can also look for their presence by lifting mulch to reveal long narrow trenches or runways that are serpentine, and that wind around obstructions. Notice the vole pathway trench and entrance hole located under this pine straw mulch. A burrow system may house many voles. Their tunnel system makes the soil feel soft and spongy under foot 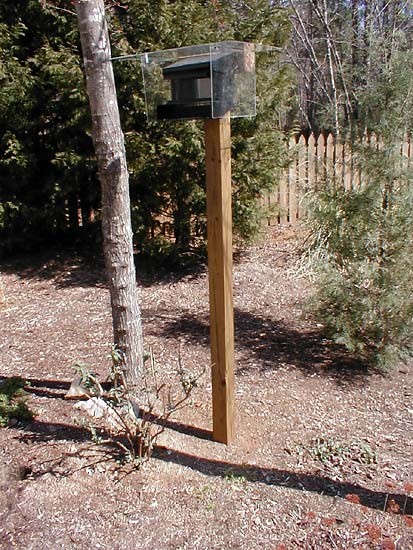 Pine vole families live in territories as small as 40' across.

Pine voles like to make tunnels or runs along house foundations, stone walls, and among perennials and groundcovers. They are also attracted to fallen birdseed from feeders.

Pine voles tend to stay in an area as small as 1,000 square feet for their entire lives. This characteristic makes it possible to move systematically across a vole infested landscape with the Vole Control Bait Station System. to effectively achieve control.

When you have Below Ground Foraging Voles, install the Vole Control Bait Station System by using the Mulch Covered Method.

You can learn more about species specific behavior of Below Ground Foraging Voles by reading about the species located in your area as shown on the maps below. Remember, however, it is not usually necessary to identify the exact species of voles to gain control. Only the foraging category must be identified for proper set-up procedures (i.e. Below Ground Foraging Voles). Once the foraging category is determined, it is important to do the SYSTEMATIC SEARCH to find the area of most prevalent vole activity. The SYSTEMATIC SEARCH will help you determine the number of Vole Control Bait Station Systems you will need and the optimal areas to place them.

Click on the maps below to learn about specific below ground vole species.