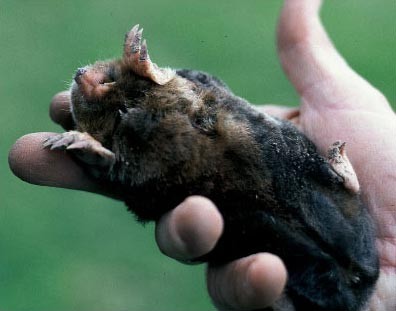 There are seven North American mole species: the eastern mole, hairy-tailed mole, star-nosed mole, broad-footed mole, Townsend's mole, coast mole, and shrew mole. The most wide-ranging is the eastern mole, which is found from eastern Texas, north to southern South Dakota and eastward to the Atlantic Ocean.

Moles have a hairless, pointed snout and small eyes. Eastern moles are insectivores and feed primarily on grubs and earthworms. For the most part, moles live in seclusion and underground burrows and rarely come to the surface. These mammals are solitary and it's rare for more than 2 or 3 moles to occupy the same burrow system. The gestation period for moles is about 42 days and they have an average of 5 young in March to April.

Moles have a very high metabolic rate and, therefore, have to consume large amounts of food. The home range of these insectivores is almost 20 times larger than that of a pocket gopher. Studies of moles on golf courses have shown that an infested area will contain about one mole per acre. Because of the extensive tunneling and length of the tunnels, it may appear that many moles occupy an area.

Moles dig elaborate tunnel systems and have feeding runways barely beneath the grass. The ridge is elevated and easily visible. That is why a mole on your lawn can stick out like a sore thumb. The tunnel system will have many yards of traveling tunnels within several inches of the ground surface. As the weather cools, moles will retreat into their deeper tunnels, up to 5 feet beneath the surface.

Moles tend to be very aggressive and will kill and consume voles or mice that may venture into their tunnels. Because of their behavior, moles have few predators. Numerous studies have been conducted on the food habits of moles. The mammal will consume about 85% of its body weight in food daily. A study on eastern moles revealed that the majority of food found in the stomach contained white grubs and earthworms. Beetles, beetle larvae, and other larvae were also present. Ants, wasps, flies and other various insects were also noted.

For the most part, moles prefer moist soil with high populations of grubs and earthworms. That is why moles are often a menace on golf courses and lawns. As you fertilize and care for grass, this attracts worms and grubs, which in turn attracts moles and provides a food base for the mammal.

Use this simple technique to determine which mole tunnels are active and should be baited.

Moles are fastidious house keepers as they require consistent environmental conditions within their tunnels. If there is an abrupt change in humidity or temperature due to a hole puncture into their tunnel, moles will quickly locate the hole and repair it. All burrows are not in use all the time, and the most active tunnels will be repaired.

Using a round-ended wooden rod, such as broomstick, probe the ground in the vicinity of conical mounds or surface ridges until the main underground runway is detected by a sudden decrease in resistance against the probe. For deeper tunnels, open the tunnel system with a shovel and leave open. Mark the spot so you can be certain to locate where you punched the hole. Within 1-2 days, if a mole inhabits the burrow, the hole will be neatly plugged with fresh dirt. Mole control treatment should only be done in these active burrow systems.

How and When to Apply Kaput Mole Gel Bait.

The bait can be applied anytime new burrows or tunnels are noticed. Early spring is usually when the first burrows are seen or after the first fall rains.  If applications are made in early spring, when moles typically
breed, you can eliminate pregnant females making control easier.  Packaged in a 3.0 oz. (84g) syringe. Each syringe will make 6 placements (half of an ounce) per burrow system.