Voles in North Carolina and How to Control Them 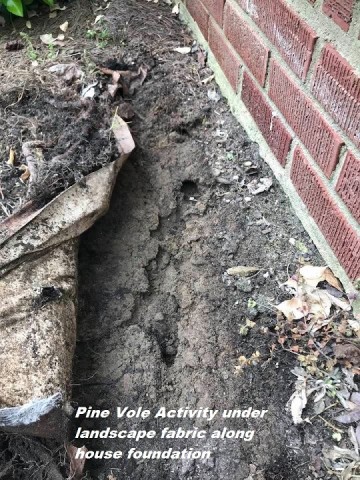 My home state of North Carolina has two vole species - the Pine Vole, also known as the Woodland Vole and also the Meadow Vole or Meadow Mouse.  As a landscaper for many years in the Raleigh, Durham and Cary area, I heard from many homeowners struggling with invasions of Pine Voles destroying their prized landscapes.  Their frustration spurred my interest in brain-storming for a better solution for vole control.  Development of The Vole Control Bait Station System began with a focus on the below ground foraging Pine Vole found in the Triangle area but grew to incorporate an alternate set-up method for the above ground foraging Meadow Vole and other similarly behaving vole-types found across the US.

Pine Voles are throughout North Carolina, whereas Meadow Voles are predominately in the mountains, yet rarer in the southwestern mountains. Meadows are also common in the northern Piedmont. They are rare in eastern portions of the state.

It isn't necessary to catch a vole or even see a vole to determine that you have them or to determine what species of vole is running amok on your property.  Signs of their activity are the first clues to vole invasion and what vole-type you have.

Pine voles live predominantly underground, building extensive below ground tunnels, especially along house foundations, stone walls, and in perennial beds and groundcovers.  Stressed or dying plants and soft and spongy soil underfoot in planting beds may be a first sign of possible Pine Voles. The damage occurs underground, so oftentimes it isn't noticed until it is extensive. (click here to learn more about pine voles).

Meadow voles, on the other hand, spend most of their time above ground.  Runways or surface trails in the grass, 1 to 2 inches in width, littered with droppings and grass cuttings are a sign of the Meadow Vole. They gnaw and girdle trees and saplings at ground level with non-uniform gnaw marks. (click here to learn more about meadow voles).

If you have signs of voles, we recommend a procedure called “The Apple Sign Test” to positively confirm their presence.

Pine Voles are slightly smaller than Meadow Voles, their length ranging from 3 to 5 ½ inches and weighing 1 oz. or less. They have reddish brown fur, a short ½ inch tail, tiny ears and nearly invisible eyes. The Meadow Vole's eyes and ears are clearly visible. Its tail is longer and its fur is dark brown. 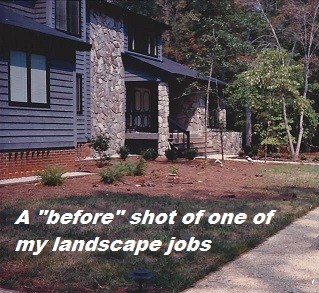 Both are active year round and prolific, however the Meadow Vole wins the prize for “the world's most prolific mammal”!

Control of both vole types can be achieved with The Vole Control Bait Station System. In North Carolina, we are fortunate not to have winters with excessively long snow coverage, so control can begin most any time and continue year round.

I enjoyed my many years as a landscaper, beautifying yards throughout the Triangle and yards south of Raleigh from Garner all the way to Fayetteville. The "Befores" and "Afters" were gratifying to see. 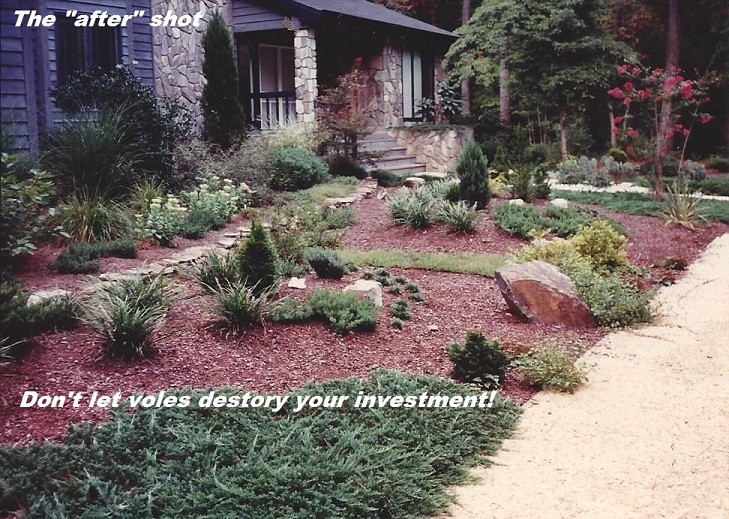 With their underground activity, Pine Vole damage can easily sneak up on a homeowner, so it is good to know what to look for. Keep an eye out for stressed plants and begin with the Systematic Search/Apple Test to confirm activity.

I am no longer in the landscape business, but it continues to be a gratifying experience helping homeowners achieve "Vole Control"!

On a side note:  Live in NC and considering a purchase?    A purchase from our site supports a NC small business AND because we are required to allocate a portion of your sales tax dollars to YOUR COUNTY, you are actually "shopping local"!   Just a little sales tax tidbit you might not know...  You Can Shop Here