Mole, Vole or Perhaps a Shrew? 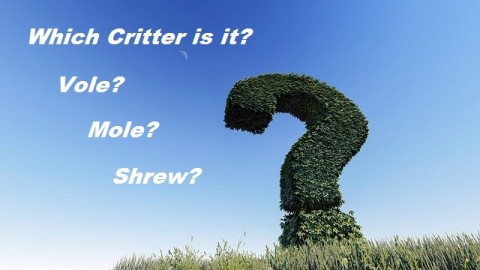 Something tearing up your yard?  Could it be a mole? Or is it a colony of voles? Or perhaps, maybe it's a shrew?  Homeowners are often confused as to which critter is responsible for the signs of activity in their yards. As for voles and moles, with their rhyming names and burrowing behavior and the havoc both critters can wreak on a landscape, there is apt to be confusion between the two.  Then there is the shrew, often the culprit of mysterious signs of activity. Let's take a closer look at what makes them different and how you can determine which creature has taken up residence in your yard. Moles?  Voles?  A Shrew? Or do you have a combination of any of these?

Identifying your pest and understanding their behavior and food sources is the first step toward gaining control.  Let's take a look at the difference between moles and voles first.

Despite the similar rhyming names, moles are in the Eulipotyphla Order whereas voles are rodents in the Rodentia Order.  One basic and important difference between the two critters behavior is their diet. An easy way to remember what they like to eat is to use the first letter of their names to remember and identify their diet:

The M in Mole is a reminder that moles are “Meat” eaters. They enjoy a protein diet of earthworms, grubs and insects. Thus, moles are going to enjoy burrowing underneath lawn areas in search of this type of food.

The V in Vole is a reminder that voles are Vegetarian, enjoying plant roots, flower bulbs, favorite hosta varieties, seeds, and growing tissue at the base of shrubs and trees along with their roots. Thus, voles will enjoy any area of your yard where they can find your plants to devour.  Voles may also take up residence underneath bird feeders where they will feast on fallen birdseed.

Along with the unique diets of voles and moles, they each pose a unique impact on a landscape.

Moles make visible raised tunnel ridges. They often make volcano shaped 2-9 inch mounds of soil as they push soil out of the way in their tunneling activity. They have a closed tunnel system without an entrance hole.

Voles have open entrance holes and their tunneling activity does not produce raised ridges. Different varieties of voles present different types of foraging activity.  Vole foraging activity can be above ground in open grassy areas occurring predominantly under the coverage of snow and results in clipped runways through the lawn.  Below ground foragers such as the pine vole enjoy planting beds where they feed on the roots of plants. Look for their presence by locating their circular burrow entrances not more than 1"-1 1/2" in size and by lifting mulch to reveal long narrow trenches or serpentine runways that wind around obstructions.  A burrow system may house many voles.  Their tunnel system makes the soil feel soft and spongy under foot.  Many times moles are blamed for this damage because voles can use mole tunnels to reach plant roots and bulbs.

If you actually see either of these shy creatures, you will see that they look drastically different as well. But of course, it isn't necessary to see them to know they are there. For the sake of curiosity though we will talk about their appearance. 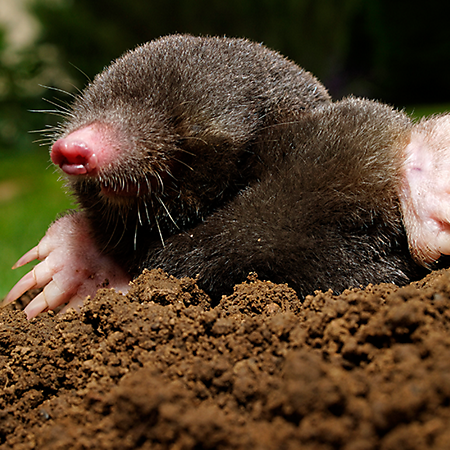 Not to be judgmental, but moles are quite ugly. Their appearance, however, is conducive to their underground lifestyle of digging tunnels. They have cylindrical bodies, poorly developed eyes and their ears are not visible. They have a pointed hairless snout with a blunt tip resembling a pig's snout and short, powerful forelimbs with large paws that are clawed for digging.  If you catch one you will find that their fur has an amazing velvety softness.

Moles are territorial and solitary mammals while voles live in colonies. Given mole's solitary lifestyle,  it is possible to control them with some effort through trapping.  If you wish to trap live moles and relocate them, check with your state for relocation regulations.  Additionally there are poisons that mimic their natural food source like Kaput Mole Gel Bait that can be safely applied to active tunnels to gain control. 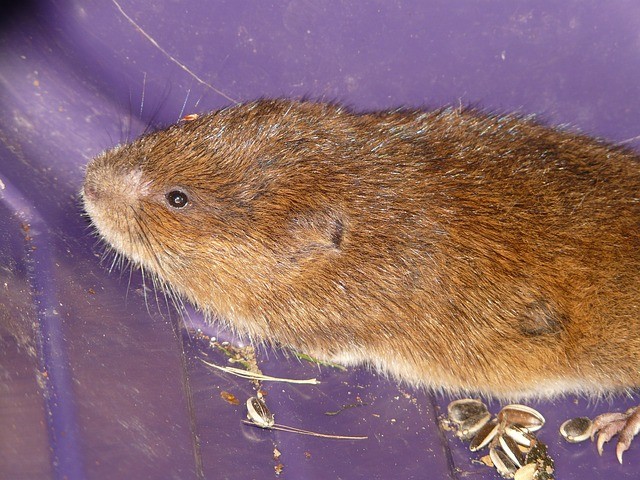 Appearance-wise, voles, on the other hand, are actually kind of cute. I actually had a pet vole for a while when I was studying them.

But if you have an infestation of voles in your yard and they are destroying your valuable landscape, they quickly lose their cute status. With prolific voles that live in colonies, trapping is less effective to eradicate the population.  The Vole Control Bait Station System used with Kaput Vole Bait is an effective and safe method of control. 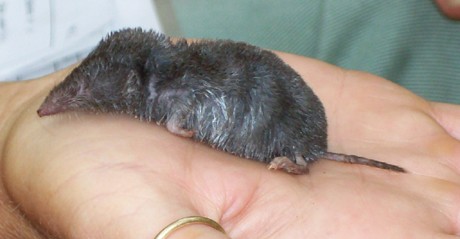 Another critter that can be scurrying around your yard and adding to the confusion is the shrew.  As for appearance, adult shrews are smaller than moles.  They have a pointier snout with fur, while the mole's snout has a blunt tip and no fur.  The feet of shrews are delicate, unlike the enlarged forefeet of moles that are developed for their constant tunneling activity.

Shrews, like moles are in the Eulipotyphla Order and solitary insectivores, enjoying the "meat" in your yard in the form of insects, earthworms and other small creatures.  Just like moles, they have a high metabolism and will  consume 100% or more of its body-weight in a 24 hour period.  However, unlike voles and moles, the shrew does not create tunnels and burrows.  They do like to use the tunnels and burrows created by voles and moles as concealed pathways and nesting sites .  They may be responsible for digging small holes in the lawn or garden which can easily be mistaken for vole entrance holes, however their diet preference is not your plants.  Looking for the other signs of vole activity such as plant damage and doing the Systematic Search/Apple Sign Test can help determine if these holes are from voles or a shrew.  Shrews are not generally labeled yard pests and are typically considered beneficial due to their consumption of unwanted pests.  However, if they pose a problem you can make the environment inhospitable with habitat modification - removing their hiding places like stacks of firewood, bricks etc. and piles of leaf debris and vegetative waste.  This same habitat modification is helpful for the control of voles as well.

Hopefully, this article has helped you understand the difference between these three critters.  I encourage you to dig deeper into our website to learn more.  Here are some helpful links:

Visit Voles, Moles or Gophers for more comparisons and pictures